She moved to DC in 1997 to work on Constitutional and Civil Rights in the non-profit sector and served as General Counsel to Senator Barbara Mikulski prior to opening Cork Wine Bar with her husband in 2008. Aside from successfully running day to day operations at Cork Market and Cork Wine Bar, Diane has been very active in neighborhood causes and local charities focusing on education and hunger.

She has volunteered and provided contributions through her businesses to local schools including the public school that her children attend. She also volunteers to help DC Central Kitchen and Martha’s Table through various efforts including her work on the committee to support the annual Sips & Suppers event. She as vice chair of Heart’s Delight Auction, a charity event supporting the American Heart Association & the American Stroke Association.

Diane serves on the board of the Restaurant Association of Metropolitan Washington. She is also chair of the Mid-City Business Improvement District Board working to create a BID in the Mid-City section of DC. In that capacity, she represents the organization before the City, manages the finances, and helps organize the annual Dog Days Event each year.

She and her husband Khalid Pitts just completed the rebranding of Cork Wine Bar & Market under one roof at 1805 14th Street. They not only kept the existing elements of the hospitality business but expanded operations to include a Tasting Bar, Cafe, Patio, Winery operation and Private Dining facility. They have been honored as Restaurateurs of the Year by Washingtonian Magazine and have won three RAMMY awards including Best New Restaurant and Best Wine Program.
Speaking At
Entrepreneurship: So You Want To Open A Wine Bar 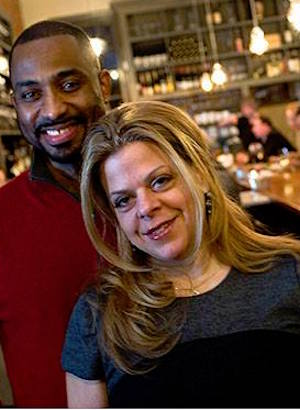